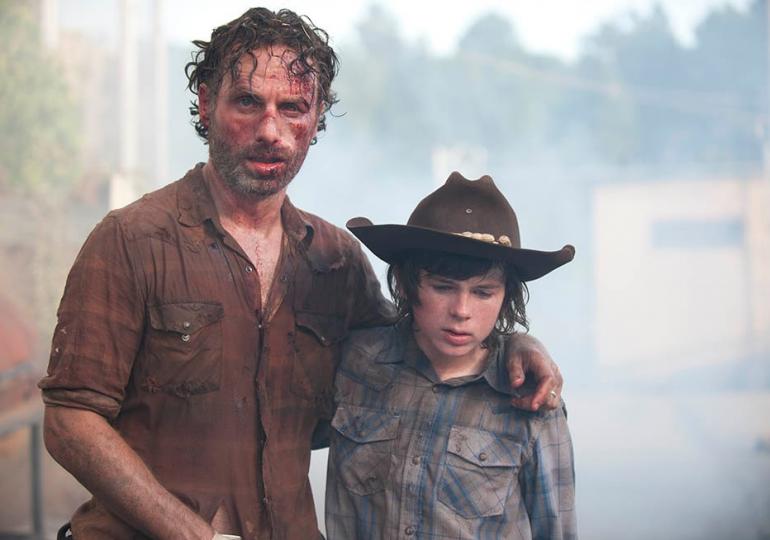 Hello there, fellow survivors!  How did our group manage in this week’s episode of The Walking Dead, episode 409, “After”?  Let’s get started…

Scenario: You’ve recently survived an all out attack on your shelter.  You’re surrounded by zombies and split off from your group.

What the survivors did:  Remove the lower jaw and arms of two walkers, lasso them, and lead them through Zombieland with makeshift leashes.

What the survivors should have done:  So, I’m in an interesting position with this one.  I’m going to criticize a survival technique that actually had the virtue of working.  It’s just I don’t understand how.

It has been explained that the way Michonne’s pets work, is that after you remove their ability to attack people, they eventually stop trying and grow relatively docile.  Now, by eventually, I assumed this behavior modification was over the course of days if not weeks.  In this episode, Michonne’s pets seemed completely tame within hours.

So that’s kind of WTF, but consider how her pets are supposed to work.  In episode 102, “Guts”, we find out that walkers tell the living from the dead, at least in part, by smell.  So if you smell like a walker, and act roughly like a walker, actual zombies will not take interest in you.

However, we also found in that episode, that a few minutes of light rain will begin to degrade the effectiveness of your masking scent, to where zombies start to take an interest in you.  Ask yourself, what would smell worse:  Two dudes in london fog trenchcoats literally covered with rotting blood, intestines, and limbs after a light sprinkle?  Or a woman walking six feet behind two actual walkers?  I mean, I haven’t tested it out for myself, Pepsi Challenge-style, but I imagine the two gore soaked dudes would smell more.

But, the one thing I don’t think we’ve considered, is the relative acting jobs that went into the two attempts to use walker-based camouflage.  In the case of Rick and Glenn, they started to panic and act decidedly less walker-like as the rain started falling.  I wonder if it was their own panic and nervousness that the zombies picked up on, and less the smell washing off.  They were both rookies to zombie survival at that point, after all, so they’d be inclined to freak out. Michonne on the other hand, maintained a stone-cold zombie demeanor throughout her walk, until she decided to slaughter the entire mini-herds, pets included.  It could be that if Rick and Glenn kept their cool, their plan would have gone off perfectly. That might make sense.

If I’m being generous.  And drunk.  And high.  I think the best advice is just to not think too hard on this one.

Scenario:  You’re a little boy, and your father with a proven track record of failure and incompetence has once again underestimated a foe and managed to let himself get beaten to death’s door, while allowing your home to be destroyed.

What the survivors did:  Tried to walk that man into the ground and show him up at every opportunity.

What the survivors should have done:  Sprint.  Rick would have never been able to keep up.

What the survivors did:  Take everything but the hot sauce.

What the survivors should have done:  Take the fucking hot sauce, man.  Your diet for the next few days is going to consist of fried pig skin and heroic doses of chocolate pudding.  There’s not much to be done for the pudding, but trust me, you’ll want that hot sauce for the pork rinds.  Got to eat dog food?  Dead possum?  Some random can of meat you found in a pantry that’s been abandoned for two years?  Well, that sucks, but you know how to make it suck less?  Pour some goddamn hot sauce on it.    Shit, if that hot sauce is good enough, you could probably use it to purify water and heal most minor infections. Although this statement is like to piss off any Texans or Kansas City readers, I’m sure the hot sauce found in road side BBQ joints in rural Georgia is going to be pretty damn good.

Take the sauce next time, boys.

Scenario: Your punk-ass son decides that securing the front door with an HDMI cable tied to a curtain tie back is a great way to bar a door.  When you express a desire to bolster that defense by pushing a solid couch against the door, he says, “It’s a strong knot.  Shane taught me.  Remember him?”

What the survivors did: “Yeah I remember him.  Every day. You got something to say to me?”  Weak sauce, Rick.  He then forces fried pork intestines down his son’s throat for punishment.

What the survivors should have done: Yeah, I remember him.  Remember DALE?

Seriously though.  Using a cable to die a door off to something that is designed to hold back a gausy drape? I’m not impressed.  If that thing was installed by your typical Home Depot Hero it’s probably just screwed directly into the drywall, not in a stud, and without any sort of molly screw. In case you’re as ignorant as Carl Jr. here, this is one step above screwing something into wet toilet paper and maybe a notch below drilling into a saltine cracker.  It’s not about your knot, there, junior, it’s about the weakest point of your security system.

If Rick really wanted to remind Carl that he hasn’t quite got the world by the horns yet, he could have just yanked the door open and watched the whole thing tear free.  “Yeah, good knot.  Held real well.  Now help me move the couch, dumbass.”

Scenario:  One fine morning, you have a couple of walkers that’ve come calling on your safehouse like so many Jehovah’s Witnesses.  Your father is incapacitated inside, you can’t abandon him, and you don’t want to attract even more zombies. And you’ll be goddamned if you’re gonna take the latest copy of Watchtower and Awake! just to get rid of them.

What the survivors did:  Lead the walkers away from the house by walking backwards and taunting them, just outside of grasping reach.  Eventually you pied piper them into a dark alley to dispose of them, where you are jumped by a third zombie, that takes five shots in total to deal with.

What the survivors should have done: Carl’s basic theory is sound, but he just didn’t think things through.  Why leave the house without a good melee weapon as a backup?  You can’t find a nice chef’s knife in the kitchen?  A curtain rod? A closet rod?  A baseball bat?  A nine-iron?  Or find some duct tape and put that nice big knife on the end of your closet rod. That’s something that does bug me about the show, why don’t they have fun and just kind of go crazy with improvised weapons?  Get all Dead Rising and duct tape some chainsaws to a kayak paddle.  Give me something, people!

And why lure the zombies into what passes for a dark alley on a bright sunny Georgian afternoon, anyway?  You’re not trying to rob them, and there are not cops or concerned citizens to worry about seeing you.  Why walk backwards?  Why keep them that close?  The zombies would be just as keen for his juicy, succulent ass from ten yards as three.  Or thirty!  Then you can watch where you’re going and glance over your shoulder from time to time, instead of the opposite.  Not only would tripping be less of an issue if your fucking feet and direction of travel are pointed the same way, but if you trip?  No big deal, you can just get back up again, no problem.

Scenario:  You’re going house to house looking for supplies and food to loot.  You come upon a house with a securely locked front door, which happens to have large glass windows on both sides.

What the survivors did:  Try to be macho and break the door down.  After that fails hilariously, use the nifty yard stake you pulled out of the ground to pry the door open.  At no point do you think to yourself, “self, maybe I should just check the back door,” or “self, why don’t I just smash this window, reach inside, and unlock the door?”

What the survivors should have done:  BREAK THE FUCKING WINDOW. GOD.  I can’t believe the people staging this scene, filming this scene, and acting this scene didn’t notice or care that this was fucking stupid.  There had to be 30 people on set that day, and any of them could have said, “hey, there’s windows all around this door.  It’s literally surrounded by glass he could break and then unlock the door, or hell, he’s skinny enough to squeeze through there.”  Unless the writers are trying to make a point at how unprepared to survive alone Carl is, in which case, bravo, you’ve just reduced a proto-badass into Simple Jack. You never go full Carl Jr., AMC.

The scenario: While clearing the house, you are ambushed by one of those convenient stealth zombies.  You know, the ones that shamble around in rooms but don’t make any sound whatsoever until the director yells “ACTION!”  But this time, you learned from your recent past experiences, and you’re armed with a makeshift spear.

What the survivors did:  Instantly drop the spear, drew his sidearm, fired several ineffectual shots from a range of about 7 feet until the gun was empty, get tackled. wrestle with the zombie for about 15 minutes while it threatens to eat your foot but can’t quite manage to penetrate your plot armor with its teeth, while eventually you escape at the cost of your shoe.

What the survivors should have done:  Oh my god, the stupidity.  Why did he even bring the spear if he was just going to drop it and use his gun?  How did Carl become such a terrible shot all of a sudden?  This wasn’t his first rodeo, after all.  We watched him slaughter dozens of zombies in much more dire circumstances during the wall breach of the prison last half season.  Granted, his father was by his side in that instance, but is Rick really that big of a Dumbo’s feather for Carl?

Plus, it’s just one zombie.  Step back from the door suddenly and the thing will fall on its stupid face.  Calmly walk away from the situation, and when you’re ready, come back and wreak havoc with your solar powered garden light. Carl Jr’s stock just plummets this episode.  Sell!  Sell!

The scenario:  You find 112 ounces of institutional chocolate pudding.

What the survivors did: Eat all 112 ounces of pudding..

What the survivors should have done:  Not eat 112 ounces of pudding.  But much like the great Ron Burgandy said upon discovering that his dog Baxter ate an entire wheel of cheese, I’m not even mad.  I’m just impressed.  That was some real Kobayashi type shit there, little man.

I think we’re done here.  This episode might well be called “After”, but I’ll always remember it as the “Carlpocalypse”.  Much like Ivan Vanko in Iron Man 2, he lacks a good grasp of the meaning of words like “win” and “lose”.  You didn’t win anything Carl, but you did lose a bit of our respect.  See you next week!

As always, if you like what we do, give us a shout out! You can email, Tweet, or Facebook us. Give us some lovin’ by leaving us an iTunes review and especially by using our Amazon affiliate link for any and all of your Amazon shopping needs. Remember, it costs you nothing, and sends a little “sumpin’ sumpin‘” our way. Win/win!