The short answer to the question “Is Zafiro Anejo a real liquor?” is “No.”  It’s actually a spirit that was made up by the Breaking Bad crew when their attempts to find product placement for that particular scene fell through.  Apparently none of the companies they approached were keen on the idea of people dropping dead mere minutes after drinking their product.

Despite being entirely fictional, there does seem to be some real-world inspiration in the design and nature of the drink.  Take a look at this bottle of Hardy Perfection Cognac. 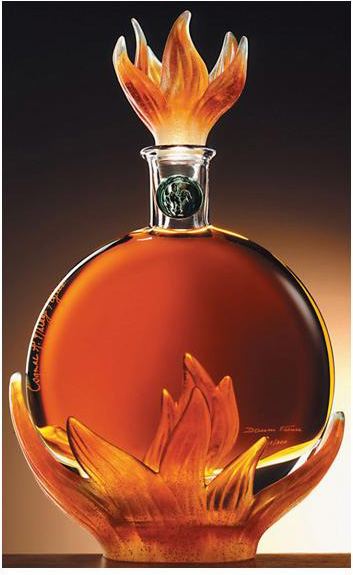 That’s a bottle of Hardy Cognac from the Perfection series.  The cognac inside is over 140 years old.  There were only 300 of these ever bottled and they come in a series of 5 themed bottles; air, earth, fire, water & light.  The picture shows the Fire bottle.  They run about $7800 per bottle if you can even find one.

Take a look at the stopper on top.  It looks a lot like the Zafiro Anejo stopper with the flame on top.  My guess is that this bottle is what inspired the ultra high-end spirit that killed Don Eladio and his men.  Agree?  Disagree?  Let me know in the comments!

And if you’re looking for more more Better Call Saul coverage, check out our weekly podcast!

* Note: during our Breaking Bad “Salud” podcast, I stated that Anejo was the silver variant of Tequila.  Turns out that it actually just means it’s aged between 1 and 3 years.  I was fooled by the clear color of the Zafiro Anejo.  1 to 3 years also seems like a very short time to age an ultra high-end liquor.  I have underwear older than that.